WE SHIP ACROSS THE U.S.

Borgatti’s Ravioli & Egg Noodles is a third generation, family run specialty pasta shop on E. 187th St. in the Bronx, NY. Chris Borgatti and his wife Joan run the business in the same location that Chris’s grandparents, Lindo and Maria opened the shop 80 years ago.

When Borgatti’s opened in 1935, Mario was just graduating from High School and he went to work in the store. Other than the three and a half years he served during World War II, he has been serving up pasta ever since.

Mario married his late wife, Erma Contento, in 1943 and they had five children together. He has seven grandchildren, all of whom have worked in the store and three great-grandchildren. For the family, working in Borgatti’s, even for a short while, has become a rite of passage. This past summer marked the 5th generation to get behind the counter when Mario’s great-grandson helped out when visiting during vacation. Borgatti’s is the quintessential family business, which customers can see from the portraits of loved ones that adorn the walls.

Borgatti’s, like many other specialty shops in the neighborhood, produces a handmade product to an ever growing customer base. When you visit Borgatti’s you are likely to find Chris and Mario in a continuous state of pasta making in order to keep up with modern demands. Though production has dramatically increased over the last decade, the quality remains outstanding, as recognized by Zagat’s Marketplace Survey which recently awarded Borgatti’s a 29 of 30 for quality.

Borgatti’s has been featured on Food Network shows, including Sara’s Secrets and The Secret Life of… Pasta. You can also see Borgatti’s and the rest of the neighborhood on the Public Broadcasting special, A Walk Through the Bronx, hosted by David Hartman and Barry Lewis. Borgatti’s has also been featured in Forbes, Better Homes & Gardens, Westchester Magazine, Epicurious and many other publications. 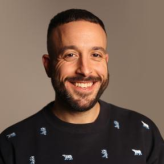